ADJUSTING TO A NEW CORPORATE CULTURE—CASE STUDY: EXECUTIVE COACHING IN A COMPLEX ENVIRONMENT

It seemed like a perfect fit: Dr. Chris (not her real name) had the exact and unusual talent and experience necessary to solve the very expensive and potentially disastrous dilemma. She’d been hired by an insurance company that was responding to competitive pressure by following an unusual strategy: they had recently purchased several hospital groups and several large physician practices. Consequently, three historic competitors were now working for the success of one enterprise.

The doctors were used to fighting with insurance companies to get enough hospital days for their patients.

The hospital administrators took their job to be filling beds and having their expensive medical equipment used at an optimal rate.

The insurance company understood its task to be expanding the size of its client base while simultaneously minimizing payouts to hospitals and doctors.

The initiators of this bold strategy were two executives, one of whom was a physician. They imagined that their own clarity and purity of intent would be sufficient to nullify any difficulties, turf battles or resistance in the huge corporation they had assembled. Readers experienced in such operations know that rarely does the outcome flow as smoothly as the plan. This case proved no exception to this general observation.

All three groups were feuding, had a different sense of values, different priorities, and each thought itself to be the most centrally important aspect of the corporation. None of the groups felt as if they were being heard or supported by executive management. Expenses were soaring as redundancies of specialization and equipment were rampant and intransigent. Losses were nearing a million dollars a week and accelerating.

You can imagine the relief, then, with which the two company leaders greeted Dr. Chris. She had a unique ability to convene a meeting of doctors and hospital administrators for a day and produce, at the end of that eight-hour period, a consensus document summarizing best practices for treating a particular illness, for example, adult onset diabetes or childhood asthma. She could, in preparation for the meeting, read, digest and synthesize all the most recent research and theoretical papers on each illness being studied. She also brought to the meeting an experienced, trained staff who could listen to the proceedings and, at the end of them, put in the hand of each attendee a document containing all that was learned and agreed to.

Everyone left these meetings ecstatic. Physicians felt free to treat their patients with the best possible methodology; hospital administrators felt as if their facilities were being put to the best possible use; and interestingly enough, the consensual best practices also were very cost-effective for the insurance company, and naturally they were very satisfying for their customers. What could be better?

Leadership could envision the eminent demise of red ink: physicians flocking to join their company, the public waiting patiently in cue to sign up as subscribers; but of course this is not what was happening.

Someone from the HR Department called my office and asked if I was available to coach Dr. Chris, who had been hired in at a high executive level. I was given background sufficient to understand her position, but such was the culture of this company that I was only told in the vaguest way the difficulty that precipitated their call. As usual, I arranged a time to visit Dr. Chris on site, as well as interview her boss, peers and subordinates. But in a way, these interviews were superfluous because after meeting her for a few moments, I knew precisely where the difficulty lay. More about that in a moment.

I interviewed her boss and found out that he was, underneath his polite veneer, profoundly disappointed and personally offended by Dr. Chris. He couldn’t say why and never did speak about the emotions storming just beneath the surface. Instead he spoke about “a lack of fit.” On the other hand, her subordinates felt that she was the most supportive, rational, intelligent and humane person they had ever worked for. She made decisions, set priorities, and assigned work in ways that they all found vastly superior to their former bosses whom they considered to be politically motivated bureaucrats. Her peers admired her brilliance and yet “weren’t really sure what her long-term success would be” at the company.

The Core of the Problem

Have you already predicted what was going on? Dr. Chris was a very strong and brilliant individual who had no notion about how to work in a large corporation populated by people with strong egos and conflicting agendas. It wasn’t that she had contempt for business politics; she was oblivious to them. When I met her she was wearing a long flower-patterned silk tent dress that looked as if it could be worn by the owner of a bed and breakfast in Big Sur, California. She wore a Mickey Mouse watch, but not just any Mickey Mouse watch: an expensive and rare specimen, one of many in her vast collection. In contrast, her peers were wearing designer suits from New York and Paris.

The difficulty in an executive coaching intervention is almost never discovering the problem. It lies rather in presenting it to the executive being coached in a way that:

The changes are necessarily deep and long lasting if the intervention is intended to produce what I take to be the products of coaching, which are:

These products go well beyond simply solving a particular problem or reaching a specific goal because they leave the client able to solve subsequent problems and achieve future goals. All this must be accomplished in a way that leaves the executive client fulfilled; otherwise, s/he will seek employment elsewhere.

From this description you perhaps can see the dilemma that the executive leadership of the insurance company was in. They desperately needed the expertise of Dr. Chris, and individually and collectively could not tolerate her style. Intellectually they appreciated her work, but in a visceral, somatic, emotional way, they were deeply offended by her lack of sensitivity to their rituals and morés.

They did not have the individual skill to resolve this conflict within themselves or even articulate it, and for her part, Dr. Chris simply noticed that her boss did not want to spend time with her and that people looked a little bit off-put by her in meetings. She did not have the observational distinctions necessary to succeed in a corporate culture. I could see both sides of this and took my challenge to be to make the following critical connections: 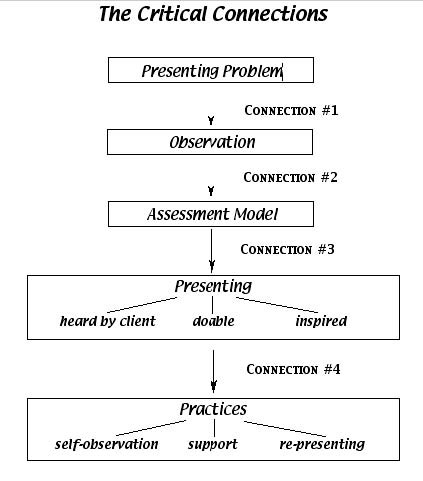 Connection #1: From the presenting problem to actual behavioral manifestations of it

Connection #2: From the observed behavior to understanding the origination of the behavior (this requires the use of a cogent assessment model[1])

Connection #3: From the assessment model to a successful presentation of the situation. Successful means the executive client sees it as resolvable, sees what s/he could do or how s/he could be to bring about what s/he intends, and is enthusiastic and committed to the program.

Connection #4: The connection between the presentation and new practices, which are behaviors that the client will do over and over again with the intention to improve. The practice will be done with standards in mind and corrected according to those standards. The central position of practices in coaching rests upon the undeniable tenant that all lasting human change must be biological. Practices are what take insights and translate them into competence by having them become somatic. (Think about how you learn to drive a car, play tennis or piano, or even how you learn to follow a complex conversation. In all these cases, your responses have to be immediate and cannot be intercepted by analytical thought. Spontaneous response in a learned activity is exclusively the product of practice.)

The flow of these connections must be seamless. The executive client must see that by taking on these practices, the difficulty will be resolved, and what was seen in the assessment will be addressed. In other words, the coach must design this flow in a way that the executive client has insight into a new gestalt. This insight is necessary but it is in no way sufficient. The power of the program comes from building upon this insight with efficacious practices that fit in a unique way with the temperament of the client and the environment in which s/he finds her/himself.

In the case we’re talking about, I used the following model, drawn from the work of Jürgen Habermas, a contemporary German philosopher and social theorist. I selected this model for its clarity and because, as a scientist, Dr. Chris could appreciate the categories employed in this model. 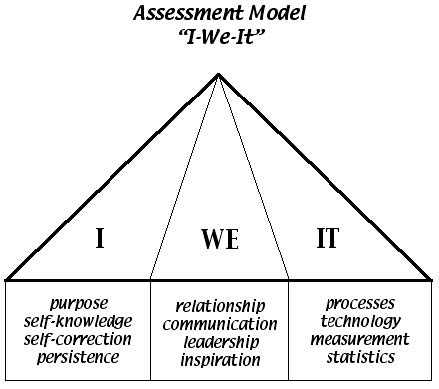 I said that each “we” domain is a culture analogous to a national culture and that when we visit another country (which Dr. Chris had frequently done), we can inadvertently insult people by ignoring their customs or way of living. This is the case even when the people we’re visiting are kind and accepting. She started to make connections at this point between her entering this “foreign © New Ventures West 2000 6 culture” of the insurance company and what it was like for her when she visited European nations. She said, “You mean that every time I dress like this, everybody around me is feeling insulted, even if they don’t say it, and maybe can’t even tell themselves?” “Yep,” I said.

I then used a new metaphor for the “we” domain. I said the “we” domain is like a human body that will defend itself against anything that it considers is “not me.” The auto-immune response consists of rejecting the offending substance: killing or neutralizing it. And given that the insurance company considered her to be a foreign substance, the auto-immune response was being triggered. “Yikes!” she said, “What can we do about this?”

At that point, I knew that I had made all the critical connections noted above. She could see how the observations and assessment model I was employing shed light on her difficulties in a way that she could correct. I took a sigh of relief because in no way did I want to insult this brilliant woman, nor did I want to dilute the truth of what I had observed myself. She was fully open to the practices I suggested, which consisted of new ways of presenting herself and new ways of conversing. She also took on a practice of building alliances, studying the history of the organization, eliciting the support of guides. These were not new practices to her in a sense as she had done the same thing when she traveled.

She took immediate and strong action and almost immediately stemmed the tide of opinion turning against her. People began to feel more comfortable working around her. Her support coalesced and she went on to great success in developing and publishing best practices for the most frequently occurring syndromes. There were bumps on the road, of course, but we returned continually to the “I-We-It” model, and after a while, Dr. Chris could diagnose her own difficulty and take effective action. The efficacy of my design was acknowledged by this result. In sum, the task of an executive coach is initially and primarily one of being able to dispassionately observe and cogently design based upon what is observed for a unique individual in a particular environment.

[1] A cogent assessment model is one in which people are not sorted by type, as if they have permanent qualities or even semi-permanent preferences that explain behavior. Instead, an assessment model takes into account competencies necessary to achieve a particular mission and the executive client’s current level of competence. The best of these models also show what impedes the building of competence and how any particular lack of competence is compensated for. The example in this story clarifies this point.