ABOUT US
OUR HISTORY

New Ventures West’s humble beginnings trace back to 1987, when seven brave participants
signed up for what was being called a  “coaching” class. 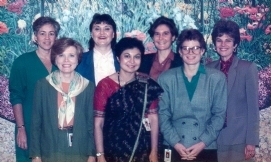 At that time, coaching was an emerging discipline being created and shaped by a small group of passionate thinkers/practitioners. One of these was the leader and designer of this first class and the founder of New Ventures West. His name is James Flaherty. And so our history begins with him.

Always a student of human behavior and committed to finding a way to ease the suffering he observed in the world, James was introduced to the world of human development in the early 1970’s when he took the est Training. He spent several years working with the organization and getting trained to lead their graduate seminar series.

During this same period, an interest in the body led him to become trained as a shiatsu practitioner and then later as a Rolfer. Being a bodyworker for many years not only gave him a different lens for understanding the human condition; it also became the means for meeting one of his most important teachers, Dr. Fernando Flores, who came to him as a Rolfing client.

As their friendship developed, Fernando offered to tutor James in philosophy in exchange for some work at his home. Thus, over the next few years, James received a personalized education from a brilliant teacher in philosophy, studying phenomenology, speech act theory, hermeneutics, and more.

The Birth of New Ventures West

It was when his daughter, Devin, was born in 1985 that James became intensely determined to fulfill his lifelong intention to contribute to humanity in a unique way. All that he’d been learning — as a bodyworker, a seminar leader, a student of philosophy and of humanity — inspired him. He began to see a pragmatic way to weave it all together. It was then that he formed the curriculum for our first coaching courses.

Launched in San Francisco, Boston, New York, and Washington DC, these first six-month programs included the seeds of our current coaching curriculum and were the precursors to the Professional Coaching Course (developed in 1994).

Over the years, many brilliant, dedicated people committed themselves to bringing this work to other communities and locations. From these efforts, our work is now available on five continents.  Our esteemed colleagues helped develop a rich curriculum of foundational classes, organizational courses, master classes, and advanced trainings, in addition to our ICF-accredited Professional Coaching Course, which enjoys a sterling international reputation.  We are proud to award the prestigious Integral Coach® certification mark to that program’s successful graduates.

Some of the students in those first coaching courses, as well as others who arrived more recently, have gone on to become leaders of our programs, which takes many years of training. Today our leader body comprises some of the most well-developed, well-read, skillful, kind and compassionate coach trainers in the world.

Read More
ABOUT US
Learn about our 30-year history
and the vast experience of our dedicated faculty.